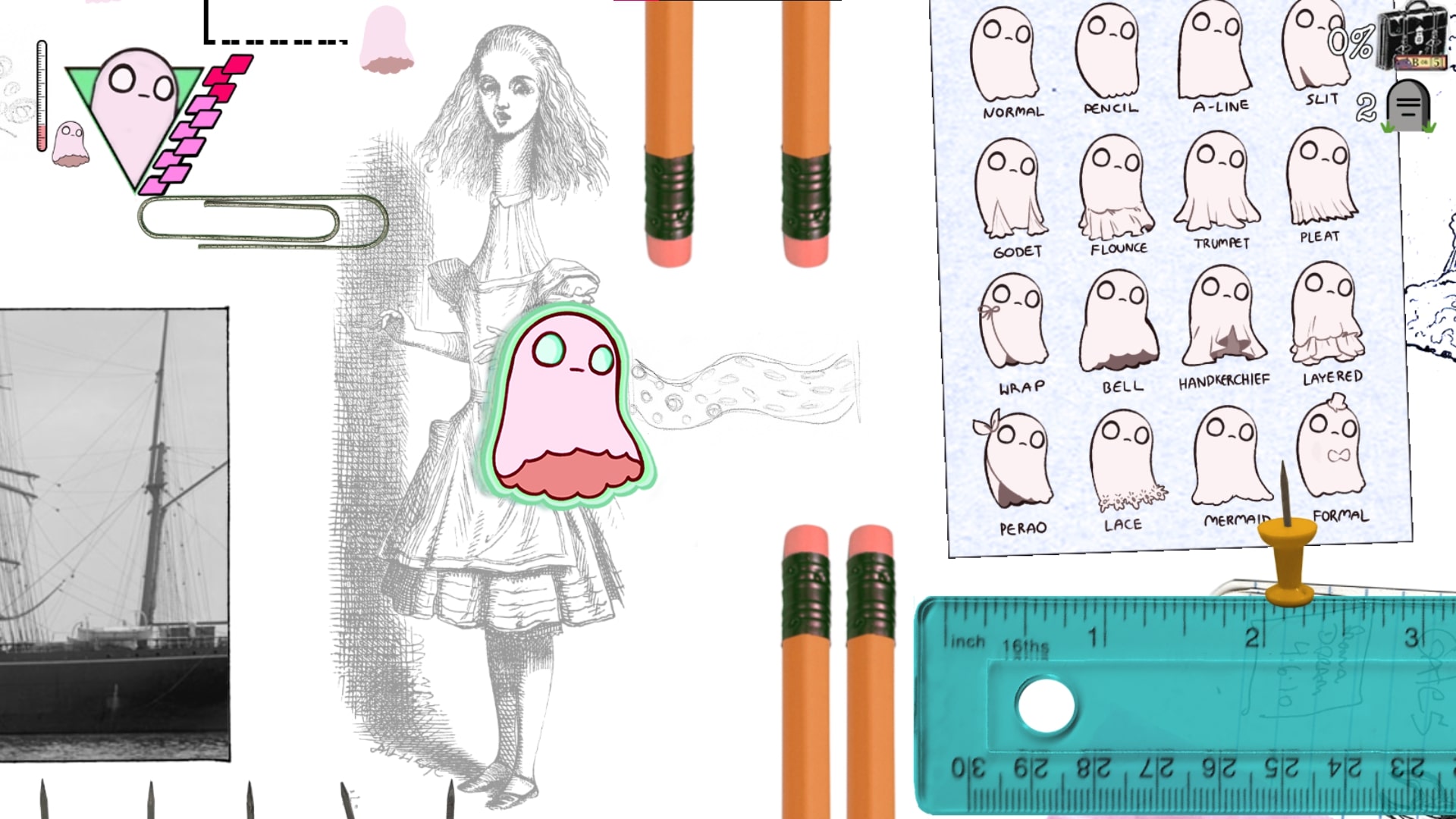 One of the incredible things about indie games, is their ability to push boundaries, be undefined by traditional conventions and create something truly original, Little Ghost is one such game.

We spoke to the incredibly humble and pioneering Alan Abbadessa about Little Ghost, a passion project where the developer has picked and chosen a collage of different influencers and individuals to help him create his project.

Alan discussed some of his creative decisions, his working process but also how he set his own boundaries to ensure he could stay focused on what his game would become. As you will see the results are pretty spectacular.

Little Ghost has over two hours now available on Steam as a playable demo and you can support the project through Kickstarter, all the way up until Halloween.

Please could you introduce yourself?

My name is Alan Abbadessa and I am the primary developer and art director of Little Ghost, a 2D puzzle platformer with metroidvania-style exploration of interconnected levels and a surreal, psychedelic, papercraft aesthetic. Over the last few years I photographed, scanned, photoshopped, and collaged most of the assets, wrote the story and dialogue, and designed the game world, the platforming and puzzles.

And could you introduce your studio?

The ghost character comes from “Little Ghost Fashions”, an image I literally just saw while scrolling online years ago, drawn by Leaf Riifuneko. The different dress designs, the ghost as almost fabric, I could sense movement and it came to life for me. I reached out to LEAF asking if I could make a game with her character and she not only said yes, but offered to make some new drawings for the playable Ghost sprites and is even designing a few of the bosses!

Law Jun Yan is the primary programmer for Little Ghost. He developed systems for the mp3 player and the custom game physics and it was even his idea to give the ~FLOAT~ power a color-coded particle effect so you’d know at all times how much time you had left.

Our latest addition is Eduardo Alexandrino. In Little Ghost, one of the main collectables are Tarot Cards and I made 4 temporary cards for the demo. But now, Eduardo is working on illustrating 78 cards for the final game and they are gorgeous. In fact, Eduardo’s art is so amazing that, as part of our Kickstarter campaign, we’re offering the full 78 cards of Little Ghost as a beautifully printed physical Tarot Deck!

While that is the core of the Little Ghost team, there’s been an outpouring of support and collaboration from Bands & Artists in differing ways and so many folks have contributed to making Little Ghost all that it truly is. 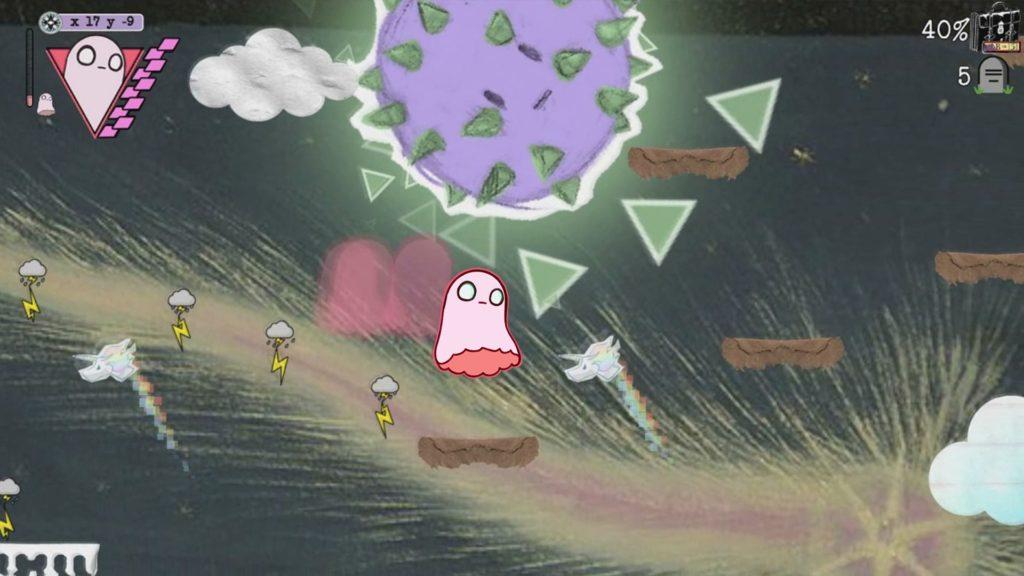 Can you tell us about Little Ghost?

Little Ghost is a 2D Metroidvania focused on puzzle platforming rather than combat. Explore a surreal paper world using a unique horizontal ~FLOAT~ mechanic. Chill-yet-Challenging, Little Ghost has great music, a sizeable interconnected map to unlock, and lots of hidden items. (Demo is 2-3 hours of gameplay with end goal)

Imagine playing a game with the objects on your desk. Help navigate the inch-and-a-half tall Little Ghost through a sprawling world collaged from the items knocked off a bookshelf. Travel across a massive desk, rummage through a perilous trashcan, and venture into a complex computer world — interacting with office supplies & unique characters along the way. Seek out powerups & friends. Unlock new moves. Collect Tarot cards & magikal tools. A slappy soundtrack motivates your way, but be sure to keep an eye out for additional scattered tunes as you go.

In Little Ghost, your strength is the unique way you glide through the air. Inspired by Peach’s floating jump from Super Mario Bros. 2 (1988 USA), the puzzles & platforming in Little Ghost have been built around the ~FLOAT~ mechanic, which allows for roughly 2 seconds of midair movement (like a horizontal jetpack). Enemies with movement patterns inspired by NES classics, a nonlinear network of rooms on an interconnected map, and an overall retro approach to gamefeel make this a true Metroidvania, even without the guns and swords.

The artwork is fantastic, do you have a background in art?

I’ve made a variety of projects over the years and have experimented with a bunch of different genres: I’ve written a few comics, edited a series of books on philosophy and the occult, done graphic design work and animation, produced a few podcasts, and have done a ton of video editing work including audio/video collage which is probably my favorite.

Ha, yes, it is kind of all these things at once. I had made a film a few years ago that was touching on all these subjects and which was for the most part an exercise in audio/video collage. I hid a bunch of quasi-subliminal winks and easter eggs, wanting to make the film interactive and game-like. But I think it ended up being a bit too obtuse or abstract and I felt like it never achieved the effect I was really going for. I started thinking in terms of art installation pieces, something I could have people physically interact with.

Around the same time, I got back into gaming after a good number of years without a console or making any time to play. Suddenly it clicked that a video game would allow me to combine all my interests and skills and the things I’ve done before into one project. I could keep all the heady film-like qualities and audio explorations, but push much of that into the subtext. And this time I could make something that was literally a game, and focus on making it fun. Since making that jump it has been a pretty fantastic ride. 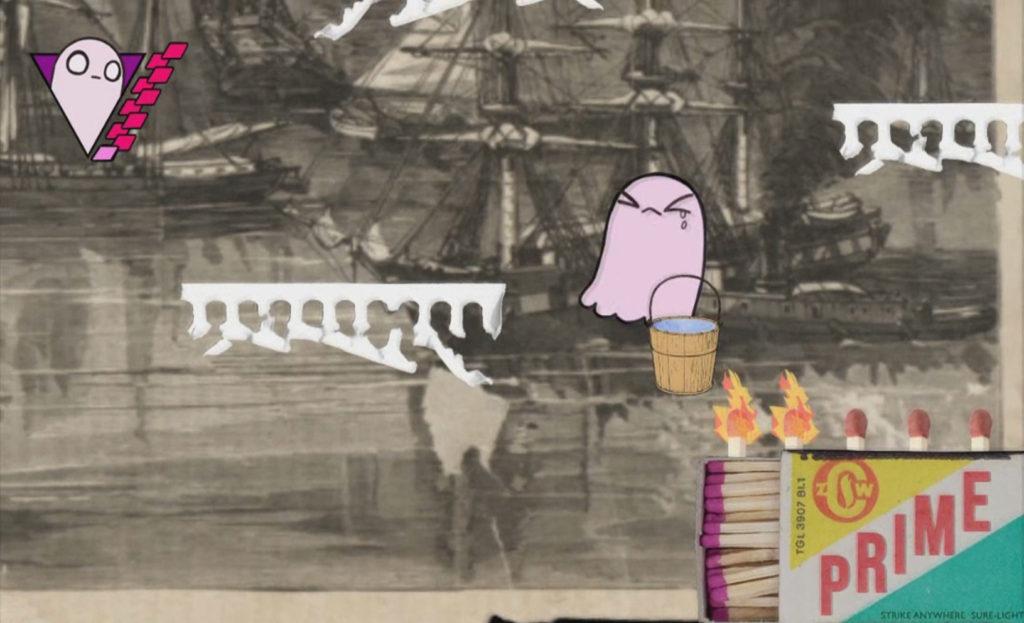 Combining retro gaming, with paper level designs, fine art and a floating ghost, is this game a complete expression of creative freedom?

Well I did give myself some structure and limitations. Whereas in a lot of my previous work I had intentionally reappropriated pieces of pop-culture in an almost Negativland-like way of making comment, for Little Ghost I made sure to either use older public domain art in my collages or in many cases to create new assets from whole cloth.

In releasing such a big slice of the game as a demo, I was able to get a lot of players to provide feedback and, with online streamers, I was able to watch them play and see what connected in real time. This allowed me to skirt the edges of abstraction, making assets that were recognizable as platforms in an action setting, but leaving plenty of room for visual and gaming possibilities.

Over the years, I’ve worked with everything from extreme abstractions to direct academic language. I believe that with Little Ghost I have struck a hard-fought balance: chaos abounds, yet the center holds. More than anything, I want to emphasize the intersection of differing media, finding surprising ways for these seemingly disparate parts to coexist alongside their juxtapositions.

The concept is very original, how important was that to you?

I make no claim of originality. I have vigorously shoplifted from my nostalgia and favorite memories of gaming as a kid. I wasn’t trying to be original, but rather to assemble a best of all possible inspirations. I knew I wanted the character to move like Peach from Super Mario Bros. 2 (1988 USA), I knew I wanted to get lost like I did in Hollow Knight and the Metroid series, I knew I found puzzles much more interesting than slashing, shooting, or button mashing.

As for the art, a lot of it is collaged from much older works, so even that isn’t completely original. But I do understand your question. The game is unique as is my art style. I know I have transformed all these un-original ideas and public domain images and even the everyday objects around my house into something that is more than a sum of its parts.

People keep saying that this game looks like nothing they’ve ever played before and I do certainly take pride in that.  There’s something very exciting in building that fragile sort of jenga tower out of all these pieces that aren’t meant to co-exist. 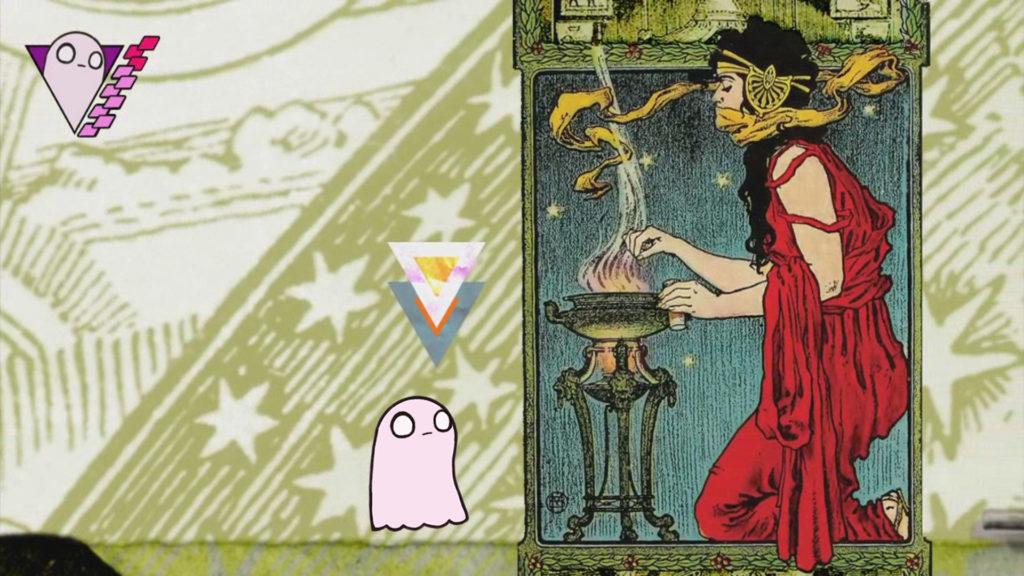 When is it out and how can people stay updated?

There are over 2 hours of gameplay currently available, completely free to play, available on both Steam and Itchio. I designed the Little Ghost demo to work almost like a “Chapter One”: it has a beginning/middle/end, it’s own goal (you can “beat the game”), and we even added 70 demo-exclusive Steam achievements for folks who like to collect those. I encourage people to try it out and to please consider supporting our kickstarter.

The Little Ghost Kickstarter runs from Oct 1st through Halloween on the 31st. Year-round info, press kit, and trailer can be found at Little-Ghost.com

For more features from Indie Devs, take a look at the Into Indie Games features page.

This Article was written by: Harry Cole